After using the robot for a while, i think that its way more efficient to buy bitcoin and leave them as using this robot, or trade manually!

So better stay away and put that money in BTC directly 🙂

Hey, like you probably already read in my about page i’m currently into BITCOIN. I discovered it in may when it was at 80 EUR/BTC and shortly after went up to 266 USD/BTC, to crash then back to 50 and later ~100 USD/BTC.

Currently we are at 130 USD/BTC at the time of this writing.

I love the idea and the concept of bitcoin and already digged into wallets and addresses, paper wallets, online wallets and all that stuff. Its quite exciting as i really see here an invention, which most likely will take on the internet and change the way we transfer and handle money on- and offline!

There is a nice calculator about the potential price of bitcoin, when its adoption increases. And this calculator predicts a prize of some 50,000+ USD/BTC when bitcoin makes only a small part of the worlds GDP (like 0.40%). Sounds good, but i can’t say for sure if this calculations are proper, as there is no open source code for that calculator.

I may will write more in the future about some useful bitcoin tools i discovered, but for today i want to talk about the bitcoin trading robot.

As some of you may have seen the buzz about btcrobot.com and it looked for me first like a scam website as the promise sound well to good.

They say their trading robot can make from 20-100% profit per month on auto trading mode.

As i’m really excited about all that bitcoin buzz i took the chance and bought a gold license (actually two, you never know :), as i’m a mac user and wouldn’t be able to use their windows client (And i also don’t want to let my computer run all day long for that).

I couldn’t find much real people writing about this, only some posts on bitcointalk.org or some affiliate advertisement websites. That’s why my post here (sure also with affiliate links, read my disclaimer below).

First off, the good thing with this robot is, that you don’t put your money on their accounts, you just provide the robot with your BTC-e API key and secret and permissions for trading and info (i wouldn’t allow withdraw :)) and he will trade for you there.

I bought my license on the 8th of august, but had some issues with my e-mail address, as i couldn’t receive their auto generated mails for password recovery. So i had to change it to another one of mine. As they can’t just change the e-mail address, they had to create a new account, but forgot to put the robot there. So it took a week of talking to the (very friendly) support to get all setup. 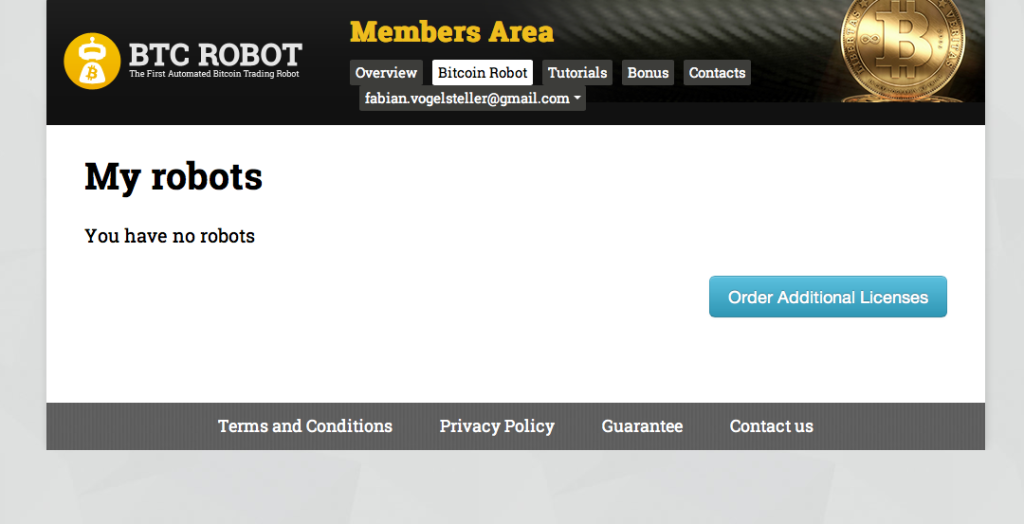 after i finally got setup i let the robot run on aggressive mode. Sadly this is not as aggressive as i thought 🙂

The robot made until now a few trades, over the course of a few days and made maybe some few bucks. I say maybe, because i see a negative value, as i withdrew money, which the robots then sees as loss (yeah i would also prefer if it’s monitoring only the profits it makes, but it seems that it is only able to tell the increase since i activated him) 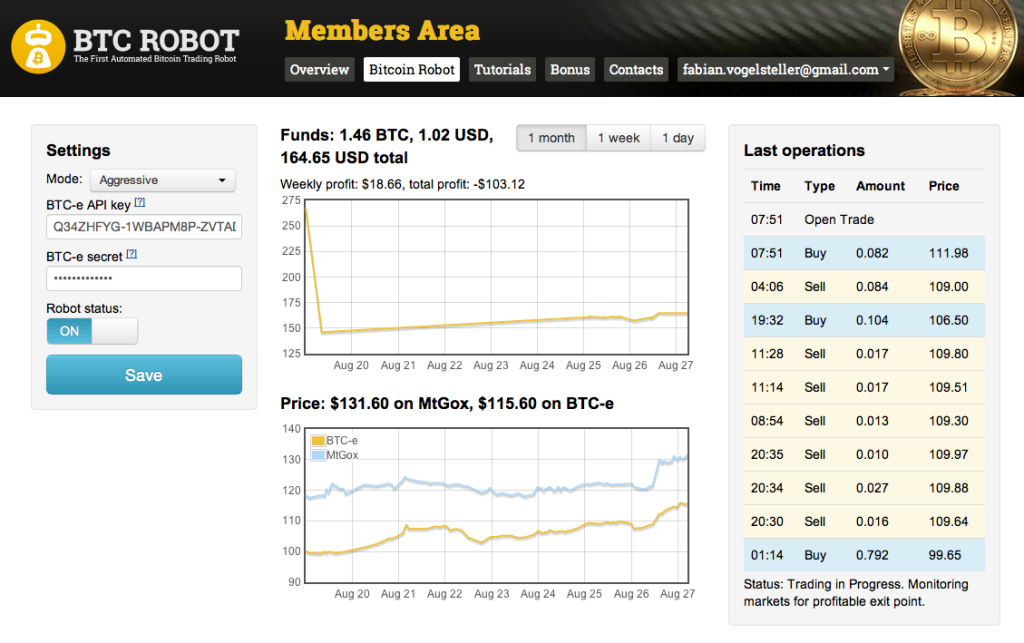 Its working :), that its a scam and i just wasted 250 USD was my biggest concern, but its obviously working and there is also a 60 days money back guarantee from clickbetter.com. Its also trading and this doesn’t look bad until now, but with my small investment, this is definitely not making me rich. I will move some more money there in the coming weeks and see what happens.

Right now it didn’t trade much, only a few small trades every day, some days none. I would prefer if it makes more small trades, as in the time active were a lot of small ups and downs.

Additionally increased the bitcoin price from 98 – 115 USD/BTC, this may explain, why it keeps most of the money in BTC, rather than distributing it more between BTC and USD.

What they could improve

They could definitely improve the interface, show more analytics data, like trends etc. I also would like to be able to see the date when the trades where made, currently it only shows the time and this can sometimes be from previous days.

They should also add HTTPS security on the members login page, as i wouldn’t like to login to my robot in public wifi like that. The good thing is, that the in the account settings, nobody can change your e-mail address, so you can always reset the password.

All in all i’m ok with the robot and happy that i got a license. They will only sell a limited amount of licenses, as otherwise this wouldn’t work anymore, when too much users use the btc robot on btc-e.

I also hope that i probably will sell the second license on ebay for much more, maybe in a year from now. 🙂

So if you have some money left over, or even a big chunk, then i would definitely recommend you put it on btc-e, buy a gold license and see what you can make with it.

All the links to the btcrobot site are going trough my affiliate link, as i wish to get some percentage, when one of you decides to try it for yourself (i guess you would do the same). If you don’t want to give me that free money, just use this link btcrobot.com